These mangled metaphors have been sighted on blog posts, Facebook and Twitter. Falsely touted as coming from actual student essays, they are really part of the Washington Post's "Style Invitational," a long-running writers forum.

Not that published literature isn't rife with malodorous metaphors - just look at Stieg Larsson's best-selling trilogy starting with, The Girl with the Dragon Tattoo. Main character, Mikael Blomkvist, has many great lines but one of my favorites is, "Martin was dafter than a syphilitic polecat..." But what can you expect from a character who states, "Sex has nothing to do with friendship."

And if you want some 'lines' that will get the attention of that 'significant other' in your life, have you tried:


Okay, so maybe you'll want to hold off on using some of these lines if you want your relationship to last... 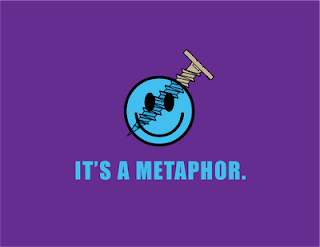 Here are some of the winners from the Style Invitational. Can you top these?

1. She grew on him like a colony of E. Coli, and he was room-temperature

Canadian beef.
2. She walked into my office like a centipede with 98 missing legs.
3. Her face was a perfect oval, like a circle that had its two sides gently
compressed by a Thigh Master.

4. His thoughts tumbled in his head, making and breaking alliances like
underpants in a dryer without Cling Free.

5. She had a deep, throaty, genuine laugh, like that sound a dog makes just
before it throws up.


6. He was as tall as a six-foot, three-inch tree.
7. Her eyes were like limpid pools, only they had forgotten to put in any PH cleanser.
8. Her vocabulary was as bad as, like, whatever.
9. From the attic came an unearthly howl. The whole scene had an eerie,
surreal quality, like when you're on vacation in another city and Jeopardy
comes on at 7:00 p.m. instead of 7:30.

10. Her hair glistened in the rain like a nose hair after a sneeze.

11. The hailstones leaped from the pavement, just like maggots when you fry
them in hot grease.
12. John and Mary had never met. They were like two hummingbirds who had
also never met.

13. Even in his last years, Granddad had a mind like a steel trap, only one
that had been left out so long, it had rusted shut.


16. The young fighter had a hungry look, the kind you get from not eating
for a while.

17. He was as lame as a duck. Not the metaphorical lame duck, either, but a
real duck that was actually lame, maybe from stepping on a land mine or
something.

18. The ballerina rose gracefully en Pointe and extended one slender leg
behind her, like a dog at a fire hydrant.

19. It was an American tradition, like fathers chasing kids around with
power tools.

20. He was deeply in love. When she spoke, he thought he heard bells, as if
she were a garbage truck backing up.
Posted by Doris Fleck at 11:51 AM

Email ThisBlogThis!Share to TwitterShare to FacebookShare to Pinterest
Labels: mangled metaphors, significant other, The Girl with the Dragon Tattoo, Washington Post