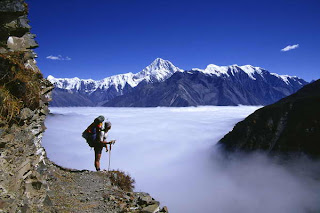 For the last five months there has been little change to the frozen landscape outside my living room window. What was a welcome white Christmas has become a mind-numbing sea of snow. March has been a glacial wasteland in Calgary and even though I love winter, I am tired of pulling on and taking off layers of clothing, slipping on icy sidewalks and cracking through the frozen snow-crust with my boots.


My toes yearn to be set free from stifling socks, wool-lined slippers and sensible shoes. I need to walk barefoot in the grass, to feel the sun beating down on me, forcing me to 'cool off' with homemade ice cream. I need spring! But since I know that won't happen for weeks, or maybe even months, I need psychological help! 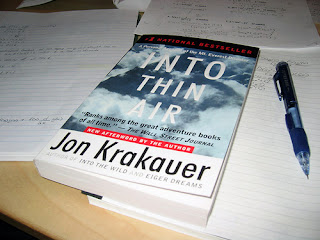 The best therapy for me is to ascend Everest once again. Yes, I've been reading Into Thin Air for the sixth or seventh time now. It haunts me, chills me to the core and puts these days in perspective.


I try and imagine being in Jon Krakauer's mountaineering boots. This award-winning journalist and mountain climber got the opportunity of a lifetime. In the spring of 1996, Outlook magazine sent him to Nepal to participate in and write about a guided ascent of Mount Everest. 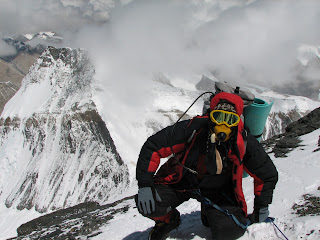 Although Krakauer made it to the 29,028-foot summit on May 10th and survived, it came at a terrible cost. Among the five members of his team who reached the top, the other four perished in a rogue storm that blew in without warning. By the time Krakauer made it back down to Base Camp, nine climbers from four expeditions were dead, and another three lives were lost before the month was out. Among those that perished high on the mountain were the two well-seasoned leaders of the largest expeditions. 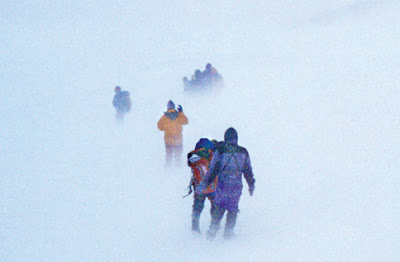 On that fateful day, other climbers made it back to Camp Four, at 25,000 feet, but were either suffering from severe frostbite or life-threatening altitude sickness. Although mountaineers have developed a method of slowing acclimatizing themselves to high altitudes, people were never meant to live above 17,000 feet. At that altitude sleep becomes elusive, cuts and scrapes refuse to heal, the air is so thin you can feel like you're suffocating and just melting enough snow to keep hydrated is a chore. Rescue by helicopter is out of the question as the air is too insubstantial to provide much lift for the helicopter's rotors, making landing, taking off or merely hovering extremely hazardous. 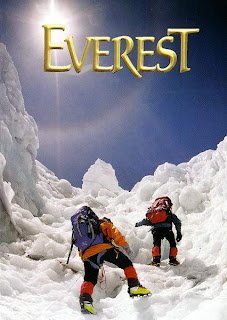 The climbers who made it to Camp Four radioed Base Camp for help. The IMAX crew film was the first group that came to the rescue. Members of this crew were in Camp Two, making their way up the mountain to film EVEREST. David Breashears, leader of the IMAX expedition, immediately postponed their own summit plans to assist the striken climbers. 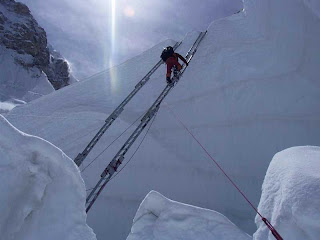 The IMAX film of this journey is disturbingly realistic. I've seen it numerous times and it makes you feel as if you are walking across the creaking icefalls, over gaping chasms, and around the dangerous, towering seracs. Only 40-minutes long, EVEREST takes you through the harrowing rescue and into the danger zone of oxygen-thin altitude.


Though many people died that day the most miraculous rescue was of Beck Weathers. The pathologist from Dallas was a member of Krakauer's team. Though he never made it to the top, Weathers became lost in the snow storm, never finding his way back to Camp Four. A Canadian climber searched for him and found him outside the camp, lying in the snow. Balls of ice were matted to his hair and eyelids; his right glove was missing and he had terrible frostbite. He was close to death and since they couldn't get him to move, Weathers was left outside overnight, in the freezing wind and cold, to die. About 12 hours later Weathers' mind floated back to consciousness and he found the strength to stand and walk. Though his eyes were almost totally blinded by ice, he stumbled upon the tents in Camp Four and the exhausted climbers still there rallied to help him. Though Weathers was critically ill with ink-black frostbite covering his nose, cheeks and hands, David Breashears brought him down off the mountain and Weathers survived the ordeal.


Although I love heights and spent many glorious days in my youth climbing local 'mountains', I will only ever make the trek to Everest vicariously. But I understand the thrill of the ascent. 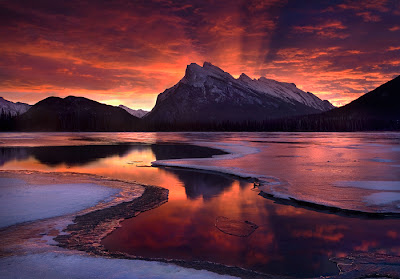 When my husband, Peter, climbs different peaks, he likes to phone me from the top, describing the view. But when he climbed Mount Rundle in Banff National Park, the message he left on our answering machine was harrowing. He was with his two nephews but they left far too late, he had hurt his ankle on the way up and though they were supposed to summit by noon, it was 3 pm when he called. On the message, the wind was blowing so hard I could hardly hear his voice. Then he groaned as he tried to lower himself down into a nook in the rocks where he could rest. He said he wasn't sure if he could make it down and thought he might have to spend the night at the summit. 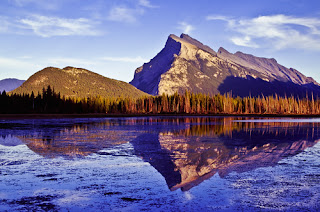 I freaked out. He was out of food, almost out of water and totally unprepared for a frigid night on Rundle's unforgiving peak. I called his sister who was at the base of the mountain and her husband started up with fresh supplies. Peter called me back and said he was going to try to make it down. It was pitch black by the time he called to say he was safe. And Mount Rundle is only 9,672 feet high, a mere hill compared to Everest.
For those of you with some spare change and a hankering for heights, a group led by Rotarian adventurers from Calgary will be heading to the Everest Base Camp in 2012. At 17,600 feet, Base Camp provides a taste of high altitude and spectacular views of some of the tallest mountains in the world without the death factor of trying to summit. The Rotary Everest Trek 2012 also gives you an avenue to support a good cause. Nepal is one of the poorest countries in the world, so funds raised from this trek will help the Sir Edmund Hillary Foundation build a high school in the region. There's the option of a two-week Everest view trek or an three-week more intense Base Camp trek. For more information check out their site here. Happy climbing.
Posted by Doris Fleck at 7:50 PM