Ever tried it? It's a blast! I've been traveling into the past lately...my past. Wish I could go back with a tape recorder or camcorder for the detailed accuracy I want, but I'm still working on my technique. 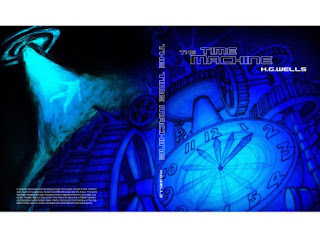 I first realized this out-of-the-world potential as a young girl, when I read The Time Machine by H.G. Wells. It still amazes me that he wrote this book in 1895 and is widely credited for popularizing the notion of time travel in general. The term "time machine" was coined by Wells himself and is now universally used to refer to a machine that allows a person to pick any time and any place, ever, for their trip. Although it wouldn't be my choice to go to 802,701 A.D. (I mean, how did Wells come up with that?) Although the time traveller in this novel made it back, on his second trip he never returned. Fair warning - time travel can be dangerous...

It didn't take long before I became fascinated with the stars and orbs in the night sky. As I read A Princess of Mars, I gazed at the Red Planet night after night, longingly, willing myself to be transported there. John Carter was able to travel through space and live for years on Mars, while time on earth changed hardly at all. (Remember Einstein's theory of relativity had yet to be written when this book was published.) Here was the first instance of time travel where you 'couldn't take it with you.' Carter arrived on Mars bereft of clothes. Not that it was a real problem, mind you, as nobody wore much of anything there. Did I mention how desperately I wanted to get to that planet? 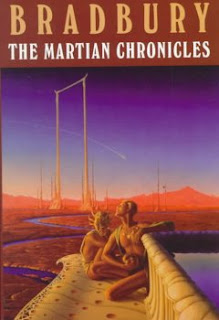 As I entered my teens I gained a new traveling companion. His name was Ray Bradbury and he and I still take long afternoon walks together, slowly sipping tea as he spins yarn after yarn. He can knit a story together like no other. He transported me to Mars but also created an alternate reality on Earth that changed my perspective on common events - like crowds at accidents, or the use of a scythe, or even how a new pair of runners can be transformational. Bradbury taught me that the faster you ride on carousels backwards the younger you become. Effectively, this type of time travel, provides eternal youth. But this too can prove deadly, as his protagonist found out. Besides, I'm not sure if I would want to live my life over and over again...even though that's exactly what I am doing with my current time travel efforts. 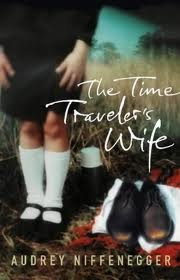 And that is what Henry was destined to do in The Time Traveler's Wife. A common trend in the books I've mentioned, is that time travelers find unconventional love interests on other worlds or in far-flung ages. But in The Time Traveler's Wife, love is what it's all about. Henry has a genetic disease - Chrono Displacement - that causes him to involuntarily travel through time. Since his destinations are linked with his subconscious, he almost always finds himself in his own past or future. Henry begins time traveling at the age of five. Once he meets his future wife, Clare, he finds himself visiting her when she was a child. He (in his early 40s) forms an deep friendship with her as a young girl and lets it slip that they will be married in the future. This creates interesting 'time lines' as the novel opens when they meet for the first time in real time. Here Clare is 20 and Henry is 28. Since he has only met her when he is older, she is a complete stranger to him, but Clare has known him all her life.

Confused? Not surprised! Time travel does that to a person. The author tells the story through alternating first-person perspectives that make it intriguing. Though this novel has been classified as science fiction, Niffenegger (take a pseudonym please!) uses time travel to explore communication, distance and loss in relationships. Unfortunately, the science element is sadly lacking. 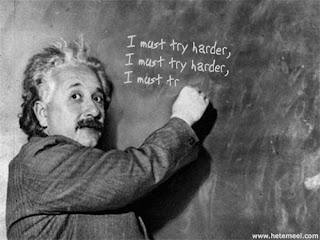 Now Einstein's theory of relativity does allow for potential time travel into the future. But many people in the scientific community believe that backwards time travel is highly unlikely. Any theory which would allow that to happen would require that problems of causality also be resolved. Meaning that your very presence in the past would change it and thus change the future.

Ray Bradbury dealt with this so well in his story, A Sound of Thunder. Here a man travelling back in time happened to leave the "path" and stepped on a butterfly. When they returned to their own time, the results were staggering. 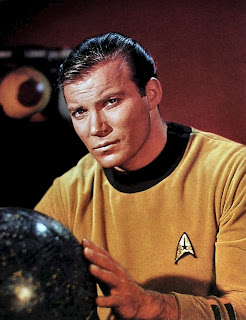 Maybe William Shatner can help me figure all this out when he comes to the Calgary Comic Expo this June. After all, he's discussed the science of time travel on his Wierd or What? TV series. And as Captain Kirk of the Starship Enterprise, Shatner & Leonard Nimoy as Spock, hurled (a matter of force not vomit) themselves back to the 1930s Depression era in America. In The City on the Edge of Forever, hailed by many Trekkies as one of the series' best episodes, Kirk and Spock go back in time to find that a cordrazine-crazed Bones (DeForest Kelley) has somehow managed to alter the effects of World War II. (Don't bother googling it - cordrazine hasn't been invented yet, even though it was also used on Mission Impossible.  But there is an Aussie band by that name, not surprisingly.)
If anyone from another planet visited earth and watched TV, they would know we love to time travel. And I haven't even started in on LOST or gotten my TARDIS fired up.

When I asked Peter where he'd like to go, he immediately said to Israel, 2000 years ago. He has traveled to this country twice in the past few years, but to follow Jesus around (with microphone and camera, of course) is too much for him to pass up. But then he mentioned it might be even cooler to go back to the time just after the Earth's creation, before Adam ate any apples. Peter imagined snapping shots of a perfect earth when Adam would suddenly say, "Hey, here comes God for a walk in the Garden. Don't worry, you won't need to use your flash." 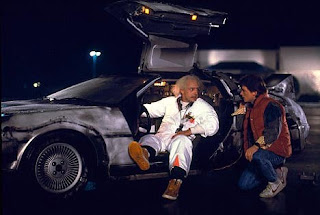 So, are you ready to go Back to the Future? Or take a flight into the past? If you decided to start travelling in time, where would you most like to go?
Posted by Doris Fleck at 3:00 AM