On A Roll: Toilet Paper Through the Ages 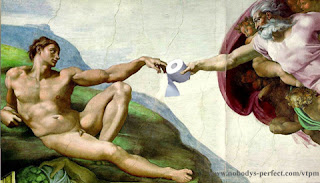 I love it! I can't imagine life without it. I can't get enough! It's so versatile, so creative. I thank God daily for Joseph Gayetty, the American credited with inventing modern, commercially available toilet paper. 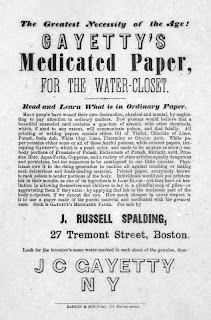 Gayetty's Medicated Paper was first introduced in 1857 and sold in packages of flat sheets, watermarked with his name on them. He must have been hoping his popularity would 'rub off' on the rest of humanity. It seems, it has since the average American now uses 50 pounds of toilet paper a year.

But America had nothing on the Chinese when it came to personal hygene in the privy. The first documented use of toilet paper dates back to early medieval China (6th century AD) where a scholar wrote, "Paper on which there are quotations or commentaries...or the names of sages, I dare not use for toilet purposes." Quite the discerning intellectual.

Later, in 891 AD, a Muslim traveler to China wrote, "They (the Chinese) are not careful about cleanliness, and they do not wash themselves with water after they have done their necessities; but they only wipe themselves with paper." Ah, and the rest of the world eventually followed suit.

But before toilet paper became a worldwide commodity, different cultures used a variety of methods to clean themselves before they emerged from 'the water closet.'

﻿
﻿The Japanese used wooden toilet paper during the Nara period (710-784). The wealthy would wipe themselves with wool, lace or hemp, while those of moderate means would use grass, leaves, sand, moss, rocks, snow and/or water depending on the country and climate.

When I was a young girl, out on an overnight camping trip, I had the opportunity to use of some of these materials. We were "roughing it" and so leaves and ferns seemed to be the best option. Unfortunately, one of my close friends had not yet learned to distinguish between various plant species. The poison ivy she chose was a painful lesson in plant identification.

﻿﻿﻿ Now we cannot discuss toilet paper without looking at one of the greatest philosphical contentions in the modern era - the "Over/Under Debate."
﻿﻿﻿ ﻿
Now the way toilet paper is rolled, has caused considerable consternation (thankfully not constipation) in our household. My husband says the toilet paper should hang under the roll. This is apparently the RIGHT way. So my feeble arguments that it is more aesthetically pleasing (and easier to use) if the toilet paper hangs over the roll is, unfortunately, wrong. But as I use the facilities more than hubby, the paper is often positioned incorrectly.
﻿
﻿
But after 20 years of marriage Peter and I have come up with our own solution rather than changing the toilet paper roll everytime we use the biffy. Instead, I will deliberately place the toilet paper the RIGHT way, on occassion, to show my love for my spouse. This he notices! I guess actions do (sometimes) speak louder than words...


So, 'bare all,' and tell me which way do you roll the toilet paper in your household?
Posted by Doris Fleck at 5:03 PM