The Half Century Mark

I never thought I'd live to be... 30, much less 50. But these five decades on planet earth have been amazing, fulfilling, challenging, frustrating and humbling.
They have taught me so much.

The most important lesson I've learned is that memories and milestones are not built around what you do, but with those you love. Close relationships have made the most significant impact on my life thus far. So since today is my birthday, I am taking the liberty of being a tad self-indulgent and raving about some of my friends.
﻿
My closest companions, dubbed "The Fat-5," have been lifelong friends for 30 years or more. Our claim to fame (and initiation ritual) was that each one of us could comsume a box of Bugles in under 5 minutes. The deep  relationships we formed in high school and university, enabled us to walk with each other through most of the major decisions in life: career choice, marriage partner, belief system & worldview. We challenged one another and if it wasn't for their input in my life, I wouldn't be the delightful person I am today :)
Not many people would have had the audacity to tell me to get a hair cut and then give me the money for it as a Christmas gift. I guess the fact that I hadn't cut my hair (other than trims) since I was about 8 had something to do with it. When I did go, there were immediate benefits as the 2 1/2 feet that got chopped off caused me to loose  5 pounds instantaneously.
﻿One of my best birthdays ever was my 21st when I was kidnapped by Lynn & Wendy. The big surprise was a Door's revival band at a local club. Jim Morrison may have been dead, but this band brought him to life again. It was also the first (and last) time I tried a B-52 (not the bomber, and no, I didn't get bombed).
Though I have known most of my friends for decades, a miracle happened in the last few years. I realize that the older we get, the more difficult it is to make really close friendships - the kind where you can trust that person to speak into your life. So the last five years has blown me away.

﻿﻿
﻿﻿First there was jill. She got my email address from an on-line story I had written about chronic fatigue syndrome. Her symptoms were so similar to mine, she wanted to ask me some questions. Soon our letters veered away from health concerns to family, faith, and fun. Jill's sense of humor and her quick wit was always evident. The problem was, her friends didn't think I existed, and couldn't understand why she wasn't more cautious about someone she had just met on the Internet. I could be a "creeper' or serial killer...
She called me her invisible friend and decided we should take a BIG step, and talk to each other by phone. In our first free-flowing conversation, there was no awkwardness - we chatted like old friends and at the end jill said, "That was just how I imagined it would be." 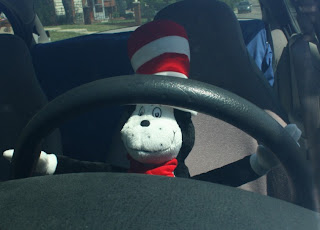 When I was feeling down she would put on her Dr. Seuss hat and either write me hilarious letters or send me bizarre gifts. One was a Cat in the Hat that has been driving me crazy ever since he arrived. But soon it was time for a real test of our friendship - meeting each other face to face!
﻿﻿﻿
﻿﻿﻿

Jill was afraid that the magical "inside-each-others-head" relationship we had would be crushed when we butted up against each other in the flesh. I was the one who cajoled and encouraged, sure that it could only get better.
In September of 2010, Jill and her husband Mark, flew to Calgary for a whirlwind four days that saw us drive to Waterton Lakes, take the heart-stopping Going-To-The-Sun-Road in Montana, get rained on in Lake Louise and enjoy the fabulous atmosphere of Banff.
Jill made us special shirts that created a stir whereever we went. Mark took after Peter and tried to get to close to a large waterfall while standing on slippery rocks. No one actually saw it happen, but his wet, clingy clothes, dripping camera and water-filled cell phone told the whole story. Luckily part of this long weekend was about revival too. Nice to see Mark's camera come back to life.
For me it was a unique experience, to have corresponded with someone for years, always wondering if this friendship would still remain if you spent time with each other's warts...
﻿
﻿ 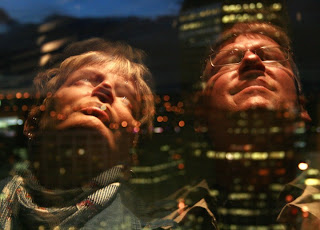 The end result was that our relationship has become more alive than ever. Mark is such a good sport and a much needed calming influence. It was only four days...but the memories will last a lifetime.
Now I can hardly wait until we take over Chicago!
The other two friendships materialized out of thin air and have developed into life-transforming relationships. Curiouser and curiouser then, that these two happened on the same day.

﻿﻿
Who would have thought that a chance lecture at a high school teacher's journalism class could have so profoundly impacted me. I mean, it was only 90 minutes. The teacher, Mr. Diakow, was someone I had never met before. He was relaxed, easy-going and had a neat way of talking to these teens. After I did my thing, I asked the students to break into groups of two and do a practise interview with each other. There happened to be an odd number of students, so one of the girls approached me and said, "I'll interview you." That was Heidi and my life hasn't been the same since. Her exuberance, the way she wraps her arms around the world, her way with words and depth of faith has woken me up from my slumber. Then there are her dances - either barefoot or fingers feeling Tchaikovsky's emotion on the piano keys. Because of her, I take the time to treasure every moment of life, and make sure I kiss the stars goodnight. She has inspired me, but I'm so thankful she hasn't licked my face yet...I know, it's coming.


It's the strangest experience to feel like you've met someone before, when you know you haven't. When Todd Diakow gave me a lift after the class, we talked like old friends. He told me more about Heidi, that she was already 90 pages into her first novel, and had a 40-year-old maturity about her even though she was a teen. I would find those words to be very true.

Then Todd told me he was also working on a novel. He was in the process of revising it for a publisher and asked if I would like to look at the first four chapters. What could I say? "Sure!" My gosh, it's been amazing to see where that simple reply has taken us.
﻿
﻿
﻿ ﻿


I soon found out his real name was Methodius (why he would want to hide behind "Todd" was beyond me). As I began reading through his manuscript I realized he was a talented writer as well as a teacher, and that was only the beginning...
Then he began to encourage me to fulfil my dream of writing fiction. I had despaired of it ever happening. Though I'm still unconvinced I can finish the book, I am about four chapters closer to my goal than I ever was before. Methodius has blown air under my tired wings and pushed me around in my 'manic-editing wheelchair' for quite awhile. He deserves better. Any normal person would have gone beyond exasperation and strangled me (although he prefers I bake him a dozen cookies for each deadline I miss). He has patience I will never comprehend. He makes me believe in my dreams. He has heard me rant and rave without judgement. God has told me he is a gift. I have never doubted this.﻿﻿
﻿﻿
The inspiration, care, humor and encourgement all three of these friends have shown me in the last few years has been totally unexpected and unparalleled.
And it makes me wonder, what amazing things will occur in the next half Century...
﻿﻿