It was April 15, 1990. Easter Sunday! I had brought my boyfriend, Peter Fleck, home to Abbotsford to visit my family. He had made a good impression on my Mom and Dad many months ago. 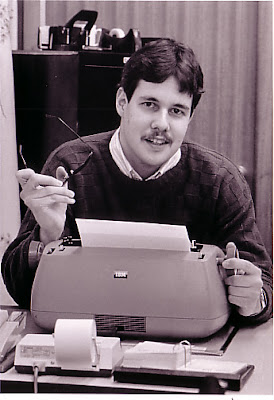 But Peter had only met my father once before my Dad died. Though I was delighted Peter and my father hit it off, I was sad that they never really got to know each other. I was my daddy's girl and I had looked forward to having him walk me down the aisle. But at my father's funeral, in November 1989, my great uncle Abe told me he would be happy to fill that role. He was the dearly loved patriarch of our family and I adored him. He knew I was in love and expected Peter to propose.

In fact, everyone was expecting Peter to propose. I'd been expecting him to 'pop the question' for quite some time and, at 29, I wasn't getting any younger. Peter and I started 'dating' in September, 1989, but we never went on normal 'dates.' We didn't go to movies or out for dinner (although Peter 'ate out' every night at my basement suite). We didn't even spend much time with others  ─ we were so besotted with each other, we just wanted to be together. Within a few weeks of 'going out,' (or staying in), we knew that our budding relationship was serious. It wasn't just about fun and friendship, it was speeding towards marriage.

Considering how fast things started, I thought Peter might propose on my birthday in January or on Valentine's Day or maybe sometime...ANYTIME in March. But here we were in the middle of April and I had nothing. I knew Peter was careful and liked to move slowly, but this bordered on ridiculous. I began to despair of a proposal ever coming.

I had even gone to great lengths to set up the perfect opportunity for Peter. The day before, we had driven into Vancouver and wandered around Stanley Park. It was one of my favorite haunts from my university days. With the sun beating down on us and flowers sprouting in full bloom, spring was in the air. There were even different species of birds going through their mating rituals all around us and I figured Peter might get the hint...

But as we stood for the final hymn at the Easter Sunday service the next day, I had given up. Peter seemed distracted and tired. All I wanted to do was help my mother with lunch and spend some time outside soaking up the sun.

After lunch, I changed into shorts and lay down on a deck chair. Peter came into the backyard quite excited. He said he had hidden some Easter baskets in the house for me and my mom, and wondered if we could search for them...now.

I opened one eye and glared at him. "Maybe later," I muttered.

Peter looked crestfallen. He stumbled around with his words, saying it would be great if I we could hunt for them now, then I could suntan all I wanted later. I sighed and went inside to find my mom and tell her we needed to go on an Easter basket hunt. She seemed delighted, so I headed downstairs to start in the basement and work my way up. 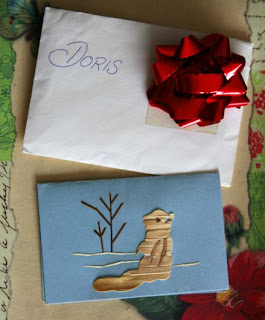 It didn't take me long to find the basket. Peter had included a number of interesting items from 10,000 Villages, one of our favorite stores. As I dug through the basket I found a tiny envelope bearing my name and a RED bow. Peter had already heard my whole philosophy on RED ─ how that word had much meaning for me. Inside was an even smaller card with a beaver on it. Peter was a proud Canadian!

In the envelope was a lengthy hand-written note with two well-worn gold rings. I later learned these were the wedding bands his grandparents wore. I should have taken the hint right away, but after having waited for so long, I needed to see what he had said... 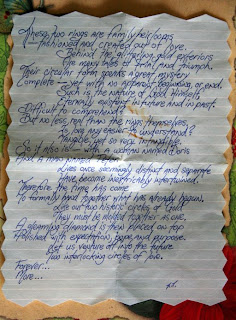 "These two rings are family heirlooms - fashioned and created out of love.
Behind the glittering gold exteriors,
Are many tales of trial and triumph.
Their circular form speaks a great mystery, complete ─ yet with no apparent beginning or end.
Such is the nature of God Himself,
Eternally existent in future and past.
Difficult to comprehend? But no less real than the rings themselves.
Is love any easier to understand?
Tangible, yet so very intangible.
So it also is ─ with a woman named Doris and a man named Peter.
Lives once seemingly distinct and separate,
Have become inextricably intertwined.
Therefore the time has come to formally band together what has already begun.
Like our historic circles of Gold,
They must be moulded together as one.
A gleaming diamond is then placed on top, polished with expectation, hope and purpose.
Let us venture into the future.
Two intertwining circles of love.
Forever...
More..."

Okay, so do you see the phrase, "Will you marry me?" anywhere in there? Neither did I! Peter was always unconventional. While I was reading his proposal over, I could hear my Mom calling from the upstairs, "I found mine!" I was totally oblivious to her and looked up at Peter who had so much expectation in his face, eagerly awaiting my response.

By then my mother found us downstairs and when she saw the rings and our expressions, she burst into tears. Then appropriately exclaimed, "I've been saving up for the wedding since November!"

I later learned that Peter had stayed up most of the night preparing our beautiful Easter baskets and writing out the proposal. He is a gifted writer after all...I was the one who should have expected this. Before Peter left with me on this trip, he told his parents he was planning to propose and they gave him their hearty approval. Even they had been waiting for him to 'get on with it.' 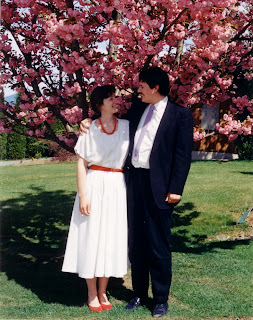 I've asked Peter what would have happened if my Mom had found my basket and opened The Proposal by mistake. He said that he'd be a widower now, and it certainly would have sent shock waves through my family at the time :)

Though I still tease Peter, that he never really asked me to marry him, it was a proposal I will never forget. I never got my sun-tanning in though. Mom made me change back into my Sunday best and took photos of me and my fiancé (I finally was able to use THAT word), under her flowering cherry tree.

This was just the beginning...
Posted by Doris Fleck at 11:12 AM

Email ThisBlogThis!Share to TwitterShare to FacebookShare to Pinterest
Labels: Easter Sunday, gold bands, inextricably intertwined, the proposal, will you marry me