What did you name your car? 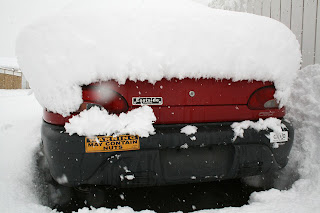 Okay, I know you've done it. You've given your car a name. Ever wonder WHY exactly we do this? My theory is, it's the 'Adam-complex.' (Freud missed this one completely.) It seems that ever since God asked Adam to name all the animals we've been naming everything in sight.

When I first met my future husband, Peter, he was driving something he called The Higgen-bomb. Affectionately named after the guy that sold it to him, Peter bought this wreck for $1 but then found .35 cents in the vehicle as he was cleaning it up. What a bargain! At the time, I hardly knew Peter, but agreed to write a story for this young editor and his fledgling newspaper, City Light News. It would be my premiere piece of published journalism. But first, I needed to survive the drive to the interview.

The Higgen-bomb was a standard Ford Maverick that didn't have any brakes...Have you noticed how people often get a vehicle that mirrors their own personality? I soon found out Peter was an active communicator. He enjoys expressing his viewpoint and looks frequently at his passenger(s) to gauge their response. In fact, on this first drive together he spent more time looking at me than at the road. He was chatting, shifting, waving his hands in the air to make a point, using the emergency brake at every stop and glancing at me constantly. Within five minutes of us 'hitting' the road, I knew we were going to die...

Peter had bought the Higgen-bomb after he found out his van was guzzling way too much gas. He only owned this van for a few short months before it's lifespan seemed about to end. The van was wheezing its last breaths, limping along the roads. Three different mechanics told him it was engine trouble. So Peter drove to Cochrane where a friend provided him with an engine and was going to install it for free. But first they decided to check out the possibility that it was only a disconnected valve. Sure enough, it was fixed in minutes and resurrected from the dead. Quickly christened 'Lazarus' Peter soon thought it more appropriate to rename it Lazarust!

In the 20 years Peter and I have been married, we've only owned three vehicles, but all have had special terms of endearment. Peter bought the Sprint the week we started going out. He's always remarked what a good week that was. It was our 'happy car.' (No, not because of that.) It got it's name after we were married and Peter had a minor altercation with an SUV that left the hood of the Sprint slightly bent. We decided that rather than fix it we would just bungee cord the hood down. Unfortunately, when we were driving on the highway, the increased air current would lift the hood up. When the winter sun was setting, and a long shadow of the car could be seen on the side of the road, the raised hood made it look like it was smiling.

After the Sprint came the Spirit. With plush seats, cruise control and air-conditioning, we had landed in the lap of luxury. I would wash this car frequently as I didn't want to have an 'unclean Spirit' around. And whenever we went for a drive, we would go wherever the Spirit would lead us...

The Saturn was next, (getting the "S" trend?) and it has been out of this world! We bought this car on December 31st at 4 pm, 2002 (talk to Peter about this) and have had virtually no extra costs so we plan to drive it into the ground, or to the stars, whichever comes first.

Ask almost anyone what they have named their car or truck and you'll get an interesting story. So will you tell me yours?
Posted by Doris Fleck at 10:18 PM