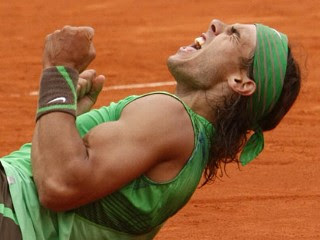 Yes, he's my tennis hero, not just because of his long hair or bulging biceps (although those help, of course). Rafa's positive attitude in each and every match, even when he is losing, is amazing. His willingness to work harder than most of the top ranked men, so he can chase down every ball is compelling. But it's how this fiesty Spainiard has dealt with the chronic tendinitis that's plagued his career that has really gained my admiration. This is a potentially career ending injury he has battled for years, and he is only 24.

In 2009, Rafa won very few tournaments due to painful tendinitis in his kness. He thought his career might be over. But he worked hard at finding a treatment that enables him to perform at the highest level.

This year was astounding for Rafa. Even his greatest rival, Roger Federer, can not claim a better year.

Nadal won all three major clay court tournaments leading up to Roland Garros, the clay court Grand Slam in Paris. The two weeks of tennis there found Rafa on the brink of elimination a number of times. His strength, determination and positive attitude kept him on the court. When he beat Robin Soderling in the final, he dissolved into deep sobs - a display of emotion he had never shown before. He explained how important it was to win this tournament after thinking he may never be able to compete again.

A few weeks later he went on to dominate Wimbledon, the grass court Grand Slam in London. Winning both tournaments back to back is something few players, other than Bjorn Borg, have ever achieved. Rafa has done it twice.

In September the U.S. Open loomed. This final Grand Slam of the year was extremely important for Rafa. To win it, would mean a career Grand Slam. Only six other men have ever won all four Slams in their lifetime as the surfaces are so completely different. In the last 48 years just Andre Agassi and Roger Federer have managed this feat.

Nadal only dropped one set on his way to becoming the youngest person ever (in the Open era) to claim the career Grand Slam crown.

Watching him play makes me believe in myself. When I see his biceps and fitness level, I start pumping iron. When I see him fight back from injury, I continue to wage war against a chronic, physical illness. When he says he never gives up on any single point in the game, I try to bring my best attitude to everyday challenges.

So who inspires you? Where do you get your motivation to be a better person? I'd love to hear your story of the 'hero's in your life!
Posted by Doris Fleck at 3:58 PM