My Grandfather's Murder and My Father's Forgiveness 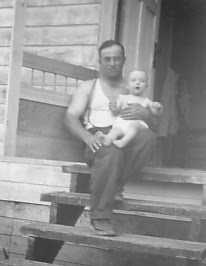 I've been preoccupied with moving lately but as I delved into a book from my father's family history, I realized the move I was making was nothing compared to what he had to endure. Escaping famine, religious persecution, looting and his own father's murder, my dad left the turmoil of Russia behind for a new start in Canada. 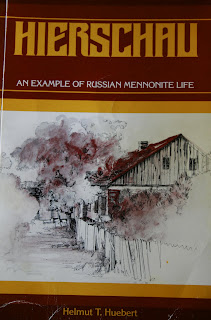 I asked him many times what had happened in Russia before he left. He only told me once, then it was through tears as he recounted the excitement turned to fear and devastating loss in the days before they left.

My father gave me, Hierschau by Helmut Huebert, an account of the Mennonite community he grew up in, but I had never read it before today - Father's Day. I was shocked to find in it the details of my grandfather's murder and the events leading up to my father's departure.

My dad was from a Dutch Mennonite heritage. His great-great-grandfather moved to Russia after Catherine the Great made an offer to these Mennonites that was too good to refuse. She promised each family 174 acres of land, freedom of religion, exemption from military service (as the Mennonites were pacifists) and no taxes for the first ten years.

Mennonites streamed in to Southern Russia and enjoyed peace and prosperity there for well over a hundred years. The Mennonite colony in Hierschau was founded in 1848 and my father was born there in 1910. But the world Henry Peter Dyck was born into was no longer peaceful. In 1914 Germany declared war on Russia. Food shortages, riots, murders and political unrest marred life in the Russian cities. Although the Mennonite colonies in the south were not as affected by these incidents, the upheaval around them soon reached their land. When the German troops occupied this area in 1918, the Mennonites hoped for some stability. The Germans were not there for long before the Red Army took over. Anarchy and terror reigned as the Red and White Armies fought each other, often in the fertile fields of these Mennonite colonies.

The new government did not honor Catherine the Great's agreement with the Mennonites. Their young men were being conscripted into the army, their religious freedom was gone and officials were interfering with religious instruction in Mennonite schools. Then a large-scale famine hit the fertile Mennonite colonies. Hunger was rampant and local bandits would pilfer food at the cost of others lives. Their monetary currency, the ruble, had been so devalued a barrel-full could not even buy a loaf of bread.

Canada and Paraguay had opened their doors to immigrants and many of the families in Russia were making plans to leave. In August 1926, my father's family sold the last of their possessions and updated their passports, getting ready for the long train and boat trip to Eastern Canada.

The Dyck's were leaving with the Willms family and so had a combined auction to raise some money for the trip. August 24, 1926 was a beautiful day. The borscht flowed freely and articles sold well. My grandfather, Peter Dyck, worked into the night organizing their belongings and counting the money made by the sale. He stayed overnight at the Willms place to protect the large amount of money hidden in the bed mattresses. My dad's oldest brother, Frank, was there too for added security.

Before going to sleep, my grandfather thanked his heavenly Father for the blessings of the day and asked for God's protection on them during the night. Three other men had come to help act as watchmen. Late in the night, as they chatted on the front porch, they heard the creaking of a wagon in the distance. Before they could investigate, bandits suddenly attacked. One of the watchmen was shot, the bullet just grazing his scalp. My dad's brother, Frank, ran to wake the others inside the house but was clubbed over the head and left for dead.

By this time the families were awake and the men tried to make sure the women and children could get safely to the barn. As my grandfather was jumping through a window, he was shot in the head and killed instantly. More shots rang out and one of the bandits was injured as well. As quickly as they attacked, the bandits scattered, without finding the hidden money.

All the gunshots had roused the village and people ran to the Willms house to help. My grandmother, Katharina, thought one of the men on security had been shot. As she came to offer her condolences she found, to her horror, that her husband was dead. 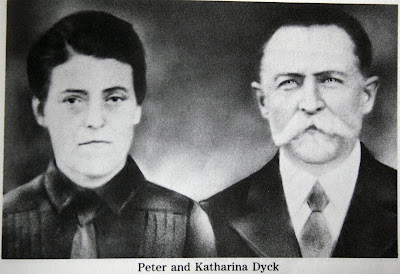 When my dad told me about my grandfather's death, tears overwhelmed him. It was a shock to his whole family. His brother, Frank, recovered from the blow he took to his head and an emotional funeral was held for Peter Dyck a few days later. All eight children cried uncontrollably. Then in early September, the whole family left for a new country, a new life - one without their father.

Fourty-four years after my grandfather was murdered, an anonymous request came from Russia through a third party, asking forgiveness from the Dyck family for this murder. Katharina was no longer living. She had actually stayed with my family for over a year and even though I was a young child, I had a chance to know my strong-willed grandmother. 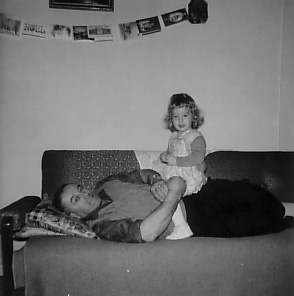 I remember the tears that flowed freely down my father's cheeks when he said he would forgive this man, who had participated in the robbery that led to the murder of my grandfather. I know forgiving this man was extremely hard for my dad to do, but his ability to forgive has left a lasting impression on me.

My dad was a quiet man but had a deep spiritual strength that marked his life. I hope I will be able to pass on his legacy, of love and forgiveness, to others through my life.