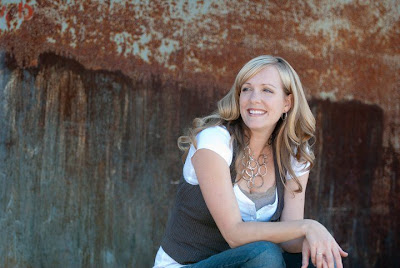 Nicole Baart loves to write: in bed, in the shower, as she's making supper and occasionally at her computer. For any writer (like me) who has water-stained notes about story revelations that ONLY become crystal clear in the tub, you will understand Nicole's passion. The good news is that her passion for penning poignant and poetic prose looks like it will continue for a long time. She has four published novels with another two awaiting publication.
This is all heady stuff and something Nicole herself says is a "dream come true." Every (unpublished) writer dreams of being 'discovered.' And that's exactly what happened to Nicole. She had a penchant for writing fiction from the time she was young, with a number of unfinished novels gathering dust. All that suddenly changed after she moved from Canada to Iowa, and four chapters of her current work-in-progress found their way to Tyndale House Publishers. They wanted more. 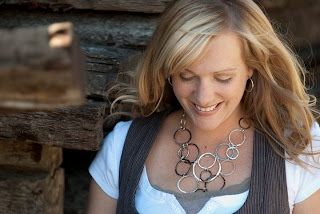 Nicole says: "It’s humbling for me to admit this, but when I started writing novels I didn’t really know what I was doing. I loved to read, and I was an English major in college, but I hadn’t taken any courses in novel writing or really even stopped to analyze what I believed were the elements of a successful novel. I guess I had something of a knack for it, but I didn’t have a good grasp of the craft of writing a novel. I have since spent countless hours reading books on craft, studying other novels, and trying to improve my writing by creating stronger characters, more interesting plots, and realistic, atmospheric settings." 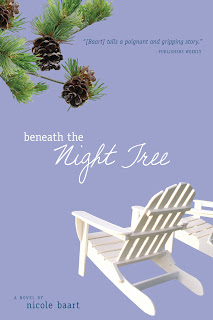 Those atmospheric settings really came to the fore in her latest book, Beneath the Night Tree. Though it's the third book in a trilogy, it can easily be read as a stand alone. As the main character, Julia, wanders out to the night tree for the first time, Nicole writes:
"The night tree was a haven.
Sometimes I prayed. But only sometimes. Mostly I just stood there and watched the sky spill moon silver on dark, graceful limbs as if the stars saw fit to anoint our little tree with light. It was a holy experience, wordless and beyond explanation, but I felt as if God was indeed there with me. Making the tree sparkle. Interceding for me when my heart couldn't speak. And every once in awhile, I felt like He whispered to me."

Her first book, After the Leaves Fall, was the beginning of this trilogy that includes Summer Snow and the recently released, Beneath the Night Tree.

Of these books, the latter is my favorite. Using a mix of lyrical prose, haunting images, and vibrant dialogue, Nicole writes real-life characters dealing with the complexities of a blended family.
Nicole says, "Writing a novel is a bit of a roller coaster ride for me. I usually begin with a strong character or two, and a vague idea of what I want to happen to that person. But the book takes on a life of its own after page one. The characters begin to develop their own personalities--and their exploits rarely coincide with my first, fledgling ideas of what the novel should be. As for going back into Julia’s world, it was a joy. I relished finishing her story."
These books center around Julia DeSmit,  who was abandoned by her mother at age nine and mourning her father’s death at age 16. Julia makes some bad choices that find her pregnant with a child the father doesn’t want. All these circumstances challenge Julia’s view of herself and God. In Beneath the Night Tree, Julia is living with her grandmother while trying to raise her five-year-old son and her 10-year-old half-brother.
Baart carefully crafts the characters so that the conflicts in the DeSmit family become part of a beautiful tapestry that knits them closer together. 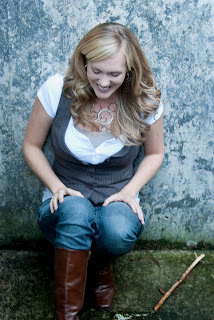 Nicole says: "This was a really fun book for me to write because I was able to draw from my everyday life. My boys are 7, 4, and 6 months old right now, and some of Julia’s interactions with her son and younger brother were taken directly from experiences that I had with my own children. It was really meaningful for me to lay some of those emotions bare, and to explore the relationship between mother and son from a bit of a distance.

I think I make myself more vulnerable than I am often willing to admit. It’s easy to hide behind the characters, to assure others (and yourself) that the character feels this way or that--not me. But those emotions came from somewhere, and I usually don’t have to look far to discover where they took root."
To me this trilogy was not only a journey of self-discovery for Julia but also a look at how God can redeem broken relationships and families and make them whole. Nicole did all this, with a touch of romance thrown in too.
Nicole comments: "If Julia’s story is a romance, it’s a love story between her and God. She is definitely keeping her eyes open for earthly love, but I believe that she longs for it in many forms from parental to platonic and beyond. A bit of romance is the icing on the cake, not the main ingredient."
This trilogy is published by Tyndale, a Christian publishing house. It's a delight to see the way Nicole weaves God into the fabric of her fiction, all the while avoiding a common pitfall in this genre where unbelieving characters become dramatically saved.
I asked Nicole, "How do you see God reflected in the lives of your characters? Do you think a Christian author can represent a false view of Christianity in fiction?" 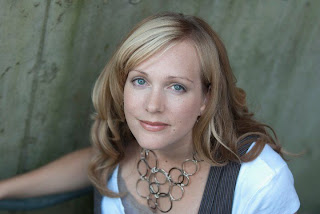 "This is such a tough question to answer because everyone has different expectations. Some reviews have claimed that my Julia books are a “breath of fresh air,” and a beautifully subtle expression of the Christian journey. Others think the Julia stories lack Christian content and “water down” God. As far as I’m concerned, God’s fingerprints are all over this trilogy. From divine revelation through the changing of the seasons and Julia’s deep love for creation and her family, to outright references, I believe God is not only present but powerful in these books. I wanted so desperately to realistically portray the faith-life of a young woman who’s not going to be found on the short-list for sainthood, but who still wrestles with what it means to love the Lord. It’s a journey, and Julia may not be as far along that road as some may like her to be, but I do think that she’s a pretty honest representation of where many people (including myself) have found themselves in their faith walk. Her grandmother, Nellie, represents another stage in the journey--one that I think Julia is steadily approaching."
There is a clear message of God's love that shines throughout Beneath the Night Tree and a strong analogy between God adopting us and Julia's adoption of her brother Simon.
I asked Nicole, who has an adopted son, "Why did you make adoption and belonging an integral part of this work?" 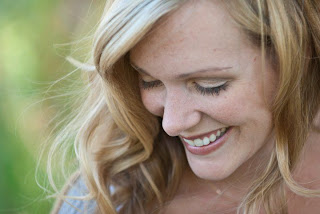 "I have such a heart for adoption. I love it. I can hardly think of the mystery of God weaving a family together through adoption without tearing up. So it was very natural for me to make adoption a huge part of this book. I believe we all want to belong--it speaks to our most basic human desire--and I let myself explore that deeply in this book. As for the psychology of belonging and adoption, I don’t know if a legal paper would make a child feel more loved. But I do believe that it communicates a certain commitment that is only possible when you make that sort of bold, permanent statement that only legality can provide. It’s like getting married versus living common-law. Marriage is serious business. It’s daring and public and countercultural. So is adoption. It says: I choose you. In front of God and all the world. Forever."
Beneath the Night Tree is a beautiful, moving piece of fiction that I highly recommend. To read more about Nicole's novels and check out her blog, go to www.nicolebaart.com
Get ready for another great interview on Friday as Nicole's first draft editor, Todd Diakow, discusses his role in working with Nicole on her novels.
Posted by Doris Fleck at 3:30 PM

Email ThisBlogThis!Share to TwitterShare to FacebookShare to Pinterest
Labels: After the Leaves Fall, Beneath the Night Tree, living the writer's dream, Nicole Baart, Summer Snow