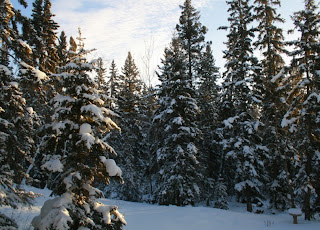 It was always me and Dad. He would sharpen his axe and we would drive miles to a spot only he knew about - the best fir trees in the Fraser Valley. Then we needed to climb. Everyone knew the most beautiful trees were hiding high up on the mountainside. Soon our frosty breath turned our eyelashes white. I touched the stubble on Dad's chin and brushed his eyelashes to watch the frost fall.

When we were tired, we had reached the perfect spot. Then came the choosing. I always picked the tallest and bushiest trees, but Dad had to explain we would need to cut half of it down as our shack didn't have vaulted ceilings. I never wanted the Charlie Brown tree. Deliberation, bargaining, compromise, and finally success. Dad chopped down the tree and we both hauled it down the mountainside, the glorious scent of pine on my gloves, jacket, scarf and in my hair. My nights would be spent in pine-scented dreams of Christmas.

We opened presents on Christmas Eve after the children's Sunday School presentation. It was always a relief to be finished my part in the play. There were over a hundred children at our church and we would rush downstairs to grab our small brown paper bag filled with peanuts, a mandarin orange and some hard candies. One year I was blessed with two oranges and dozens of candies, much to the chagrin of my friends.

Christmas traditions changed as I got older. Once I married Peter, one of his traditions became my favorite. When we spent time with his family in the Red Deer/Bentley area, we would go to the Red Deer hospital on Christmas Day and stroll down the wards singing to all the patients who were too sick to be released over the holidays. Usually there were close to 20 of us, from children to older adults, caroling and bringing cheer to anyone who would listen.

This tradition became especially poignant for us when Peter's Dad was taken to the hospital on Christmas Eve in 1997. His health had been failing and we knew this might be his last Christmas with us. On Christmas Day we gathered by his hospital bed and sang carol after carol, while tears streamed down his wrinkled cheeks. It is a memory I cherish as he died four months later.

What Christmas traditions do you have? What was your favorite Christmas?
Posted by Doris Fleck at 11:15 PM